After Bernie Sanders outperformed expectations in Florida, Illinois, Missouri, and North Carolina but still fell short of victory in every state that voted on March 15, analysts noted that Sanders would need to secure an average of 58 percent of the remaining vote to win the Democratic nomination.  In the time since, Sanders has run a bit below that mark; while he secured very big wins among overseas Democrats and in Alaska, Hawaii, Idaho, Utah, and Washington, a tough loss in New York held him to just over 55 percent of the last few weeks’ pledged delegates.  But while New York was undeniably a setback, Sanders has still had a strong start to the second half of the primary season and maintains a definite (albeit low-probability) shot to win.

The election will likely hinge on June 7, when voters in California, Montana, New Jersey, New Mexico, North Dakota, and South Dakota will all head to the polls.  Combined, these states hold just under 50 percent of remaining pledged delegates.

California, home to 34 percent of remaining pledged delegates all by itself, is particularly enticing for Sanders.  The state has a semi-open primary, meaning that “No Party Preference” voters (but not Republicans or members of the American Independent Party) can participate in the Democratic nominating process, and such voters prefer Sanders to Clinton by wide margins.  California is also on the West Coast, where Sanders has performed quite well thus far, and it is a leader on issues like environmental sustainability and the minimum wage, areas in which Sanders has a much bolder platform and stronger record than Clinton.

As has been the case throughout the country, Sanders’ standing in California polls has steadily risen as voters have become more familiar with him.  He still trails Clinton by 8.5 percent there, but that’s a major improvement from where he was only a couple months ago, and he’s definitely got a chance to close the gap more and overtake Clinton before voters head to the polls on June 7. Big Sanders wins in California and the other states that vote that day certainly aren’t high-probability events, but lower-probability things have happened during this election cycle.

How big those June 7 wins will need to be will depend on how the next seven weeks shake out.  The graph below shows the June 7 vote share Sanders would have to get under four possible scenarios: 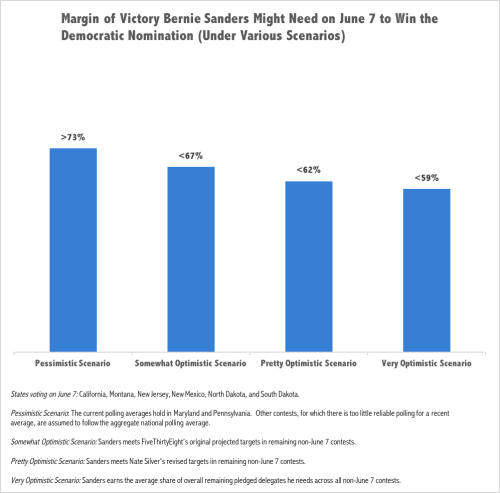 As the graph makes clear, Sanders has a very uphill climb ahead of him. But he also still has a potential path to victory.  What that path will look like is not entirely within our control, but his supporters’ continued advocacy in Connecticut, Delaware, Guam, Indiana, Kentucky, Maryland, Oregon, Pennsylvania, Puerto Rico, Rhode Island, the Virgin Islands, and West Virginia can make a big difference before California, Montana, New Jersey, New Mexico, North Dakota, South Dakota, and Washington, DC (the only place that holds a primary after June 7) head to the polls and potentially help him win this thing.  Every remaining primary matters.

Update (4/20/16): This post originally used the term “Independents” instead of “No Party Preference” voters, but this wording was changed to avoid confusion given the existence of the American Independent Party.

Update (4/26/16): Sanders’ aggregate performance in Connecticut, Delaware, Maryland, Pennsylvania, and Rhode Island was roughly consistent with the pessimistic scenario outlined above; that scenario has gotten a little more favorable, but the other scenarios are now steeper.