Believe It or Not, Bernie Sanders Outperformed Projections on Super Tuesday II – And the Calendar Gets Better from Here On Out

“The 2016 Democratic primary effectively ended Tuesday night, with Hillary Clinton as the all-but-certain winner,” the media has declared.  Bernie Sanders needed some wins, they tell us, and “his path to the nomination is now essentially blocked.”  Since Clinton is over 300 pledged delegates up on Sanders – more than twice as many as Obama ever was on Clinton in 2008 – the president of Clinton’s Super PAC insists that it “is all but mathematically impossible for Bernie Sanders to overtake her lead.”

The only problem with the media and Clinton campaign narratives?  They’re not true.

That’s not to say the results on Tuesday, March 15 weren’t disappointing for Sanders supporters, who were hoping for a repeat of Sanders’ historic upset in Michigan a week before.  But that result was always unlikely; Sanders wasn’t actually predicted to win a single state on Super Tuesday II.  As the graph below shows, Sanders came close to meeting expectations in Ohio and exceeded them in Florida, Illinois, Missouri, and North Carolina.  In other words, while it was a tough night for Sanders in terms of pledged delegates, it was a pretty good night for Sanders relative to projections, not to mention the massive polling deficits he faced mere weeks ago. 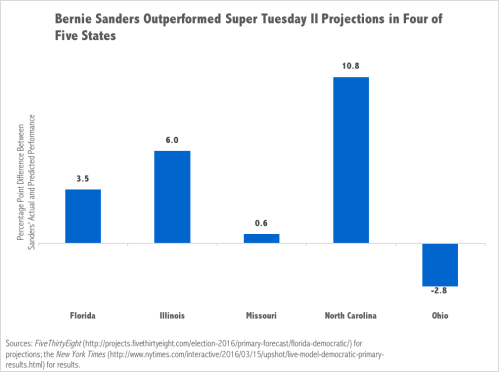 Sanders also still has a clear, albeit outside, shot at winning the Democratic nomination.  We’re only halfway through the primary calendar and he is likely to do well in upcoming contests.  Tuesday put him behind the targets he would need in one possible path to the nomination, but there are a number of large, delegate-rich states left, including New York and California, and a good run in the next round of primaries and caucuses would keep Sanders well within striking distance of Clinton.  Again, winning the nomination is definitely a long shot for him – he’d need to pull off more Michigan-like upsets to do it – but if Sanders supporters keep donating, phone banking, and otherwise volunteering their time, it’s also definitely still possible.

Despite these facts, the media and the Clinton campaign will be selling a different, inaccurate story.  It will be up to Sanders supporters to make sure that voters don’t buy it.

3 responses to “Believe It or Not, Bernie Sanders Outperformed Projections on Super Tuesday II – And the Calendar Gets Better from Here On Out”