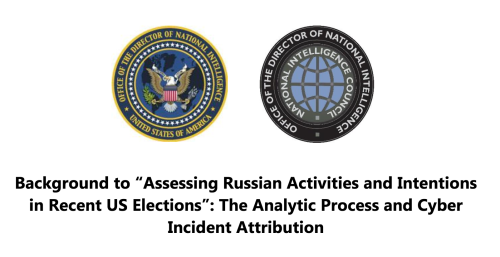 The Office of the Director of National Intelligence just released a report on Russia that lacks evidence and casts legitimate critiques of United States policy as part of a Kremlin plot.

On Friday, January 6, The Office of the Director of National Intelligence (DNI) released a report – Background to “Assessing Russian Activities and Intentions in Recent US Elections”: The Analytic Process and Cyber-Incident Attribution – that had been ordered by President Obama.  The report’s headline assertion, consistent with what anonymous officials had been saying to media outlets for months, was that “Russian President Vladimir Putin ordered an influence campaign in 2016 aimed at the US presidential election.  Russia’s goals were to undermine public faith in the US democratic process, denigrate Secretary Clinton, and harm her electability and potential presidency” (thus electing Donald Trump, the candidate for whom “Putin and the Russian Government developed a clear preference”).

While U.S. intelligence agencies “did not make an assessment of the impact that Russian activities had on the outcome of the 2016 election,” the report did claim that “Russian military intelligence (General Staff Main Intelligence Directorate or GRU) used the Guccifer 2.0 persona and DCLeaks.com to release US victim data obtained in cyber operations publicly and in exclusives to media outlets and relayed material to WikiLeaks,” actions that some Democratic Party leaders and media pundits believe contributed to Trump’s win.  Predictably, then, the report’s release has led to renewed outrage, with some prominent public figures declaring that Russia committed an “act of war” deserving of an aggressive US response.

One major problem with this response is that the report offered “no new evidence to support assertions that Moscow meddled covertly [in the election] through hacking and other actions,” as a piece in The New York Times noted.  Though it’s certainly possible that the Russian government was behind an email to John Podesta that a Clinton IT staffer mistakenly called “legitimate,” the American public has yet to see proof that Russia ordered such a phishing attack.  What the American public has seen, on the other hand, is a parade of misleading and sometimes outright false stories about Russian hacking that likely have something to do with 50 percent of Democrats’ belief that “Russia tampered with vote tallies to help Donald Trump,” a claim for which even the report admits there is no justification.  Especially given our intelligence agencies’ history of deceiving the public into wars in Vietnam and Iraq – not to mention current DNI James Clapper’s false claim about NSA spying in 2013, the FBI’s attempt to get Martin Luther King Jr. to commit suicide in 1964, and various other violations of people’s rights and the law over the years – skepticism of their current claims about Russian hacking, at least until they present some convincing proof to back up those claims, is well warranted.

Even more alarming than the report’s lack of evidence about Russian hacking was its ironically propagandistic accusation that the television network RT is a “propaganda machine” engaged in a “Kremlin-directed campaign to undermine faith in the US Government and fuel political protest.”  Among what the United States government appears to consider part of this “Kremlin-directed campaign” of “propaganda:”

Those reading this list would be forgiven for being more convinced that RT is worth watching than that it peddles in Russian propaganda.  Violations of civil liberties in the United States are ubiquitous.  So is police brutality.  It’s an undeniable fact that our government’s use of drone strikes routinely kills innocent civilians.  Millions of social justice advocates across the United States oppose fracking, Wall Street greed, and America’s undemocratic electoral system for good reason.  And while fearmongering about the national debt is a definite problem, those doing it are more often moderating U.S. presidential debates than abetting the Kremlin.

To be fair to our intelligence agencies, RT is state-owned and does, as the network’s Editor in Chief Margarita Simonyan has admitted, have an explicitly Russian agenda.  But as Simonyan correctly points out, “there is not a single international foreign TV channel that is doing something other than promotion of the values of the country that it is broadcasting from,” and that includes the US-backed Voice of America network.

In fact, mainstream media outlets in the United States, despite their technical independence from the federal government, often uncritically advance the ideas of those in power as well.  The Times’ publication of inaccurate information about former RT anchor Abby Martin after the intelligence report came out is a good example: they said Martin had quit RT because of her view that it was a propaganda outlet when Martin did no such thing – she was actually supported by RT even while she produced content critical of the Russian government.  The Times modified its article post-publication, but the piece still blatantly misrepresents what happened with Martin.  Recent and egregiously incorrect reports on “fake news” and the U.S. electrical grid in The Washington Post are other prime illustrations of this problem.

None of that makes any actual propaganda from RT less pernicious, demonstrates that the Russian government wasn’t behind a phishing attack on John Podesta, or means that U.S. intelligence agencies must be lying.  It just means that we should be skeptical of claims presented without evidence to support them, particularly if the sources for those claims have a less than stellar relationship with the truth – even if those sources happen to be the United States media and/or the United States government.