In Pennsylvania, the biggest delegate prize on Tuesday, April 26, 11 percent of Democratic primary voters indicated in exit polls that “electability” was the “candidate quality” they cared about most.  Of those voters, 83 percent cast their ballots for Hillary Clinton.

The results were similar in Connecticut and Maryland and have been pretty consistent throughout the entire country; the 8 to 21 percent of voters who value electability more than anything else have overwhelmingly voted for Clinton in every state in which exit polling is available except Vermont (where Clinton got “only” 50 percent of the votes based on this criterion).  The strongly held belief among Democratic primary voters – at least, those Democratic primary voters who care most about the electability criterion – seems to be that Clinton is more likely than Bernie Sanders to win a head-to-head general election matchup.

This belief, however, is completely at odds with the evidence.  Polling data and voting results clearly imply that Sanders would match up better against any of the Republican candidates than Clinton would.  If voters who cared about electability had been aware of this evidence when voting, Sanders could very well be on his way to wrapping up the Democratic nomination (rather than facing a very narrow, though not impossible, path to victory).

I don’t personally value perceived electability very much: I care more about candidate records and values, electability often ends up being a self-fulfilling prophecy and, given that it requires speculation about numerous unknown factors, electability cannot be gauged with certainty.  But I’ve written about it during this election cycle both because there are people who do care and because a fact-free media narrative about electability has been sowing misinformation among Democratic primary voters.

Head-to-head polling matchups against potential Republican candidates are the most direct evidence we have on the question of electability.  As the graph below illustrates, those polls clearly favor Sanders, and they’ve done so since before voters in the first primary state (Iowa) headed to their caucus locations. 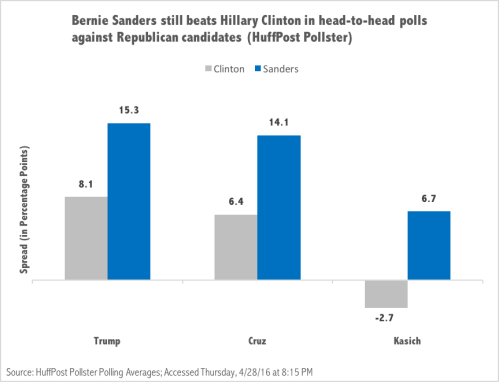 Pundits continue to insist, as they have for months, that these poll results are “meaningless” (or, at best, that they “overstate [Sanders’] general-election prospects”).  They argue that Sanders “hasn’t been attacked” yet by Republicans and that, if attacks began to air, “his advantage over [Clinton] would disappear.”  Yet Sanders has been attacked by the GOP; Donald Trump has been calling Sanders a “maniac” and “communist” for the last six months, Right-wing media outlets have been telling people that, under Sanders, “your paycheck will feel the Bern,” and Future 45, a Republican Super PAC, launched an ad campaign back in February intended “to start educating Americans about [Sanders’] out-of-touch record.”  In fact, the “glaring [general election] vulnerabilities” one columnist described Sanders as having back in February – being old, being labeled a “socialist,” and wanting to raise taxes – are all things that Hillary Clinton and/or her surrogates have already attacked him for during the primary season.

GOP operatives would surely intensify their attacks on Sanders if he became the Democratic nominee.  But the fact of the matter is that head-to-head polling in April is often predictive of general election outcomes and that, in spite of numerous attacks leveled against him over the past few months, Sanders’ popularity has continued to rise steadily.  Clinton’s popularity, as the chart below shows, has been consistently headed in the opposite direction. 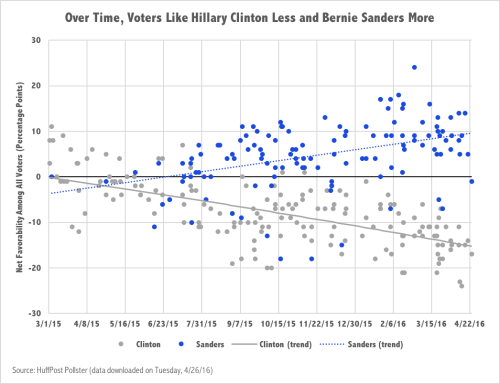 In addition, young voters, who “arguably won both the 2008 and 2012 elections for Barack Obama,” prefer Sanders to Clinton by very large margins.  So do Independents.  If the Democrats want to secure these critical voting blocs in November, the next two graphs strongly suggest that they’d be best off with Bernie Sanders as their nominee.

In short, the electability evidence overwhelmingly favors Sanders, and most voters who have seen it, as I’ve been unsurprised to discover while phone banking and canvassing on Sanders’ behalf, find it convincing.  The problem is that most people haven’t seen it and/or have been told, erroneously, that it doesn’t matter; that’s the most likely explanation for the exit poll results we’ve seen thus far.

Just for fun, I decided to see what the election would look like in an alternate universe, one in which this evidence was widely available to all voters.  Those who prioritized electability would at the very least split evenly between the two candidates, but would more likely vote for Sanders in margins as large as those by which, in the actual results, they’ve broken for Clinton.

Holding every other voter’s preferences constant, these scenarios would have drastically shifted election outcomes.  If voters prioritizing electability had been equally as likely to break for Sanders, Sanders would have won Connecticut, Illinois, Iowa, Massachusetts, Missouri, and Nevada.  Clinton’s pledged delegate lead would have fallen from 287 to 129, a total that would have been viewed as surmountable.  And if Sanders dominated among these voters, he would have won New York, North Carolina, Ohio, and Pennsylvania as well.  As the graph below shows, increased awareness of electability evidence could very well have put Sanders ahead of Clinton by 83 pledged delegates. 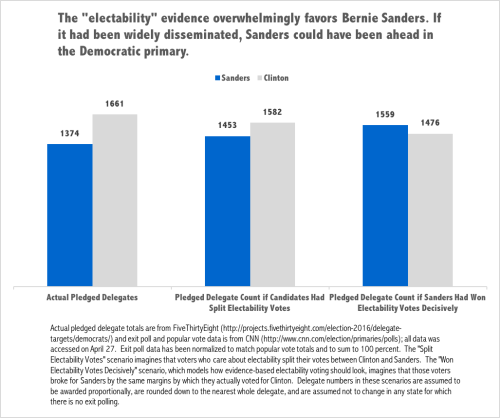 In other words, if the facts on electability had been publicized and everything else had remained constant, Sanders might today be the frontrunner for the Democratic nomination.

That’s obviously a huge “if” and it doesn’t in any way change reality: Clinton is winning big and time is running out.  But electability hypotheticals provide some insight into how the 2016 Democratic primary process, like far too many of our public debates, has been driven more by misleading media narratives than by the facts.

I know, I know – as Sanders likes to remind us, “telling the truth” is considered a “radical idea” in American politics.  But as his candidacy has also underscored, that certainly doesn’t mean we shouldn’t do it.

Update (6/5/16): Adam Johnson has thoroughly debunked “The Myth That Sanders Hasn’t Been Criticized.”

Believe It or Not, Bernie Sanders Outperformed Projections on Super Tuesday II – And the Calendar Gets Better from Here On Out

“The 2016 Democratic primary effectively ended Tuesday night, with Hillary Clinton as the all-but-certain winner,” the media has declared.  Bernie Sanders needed some wins, they tell us, and “his path to the nomination is now essentially blocked.”  Since Clinton is over 300 pledged delegates up on Sanders – more than twice as many as Obama ever was on Clinton in 2008 – the president of Clinton’s Super PAC insists that it “is all but mathematically impossible for Bernie Sanders to overtake her lead.”

The only problem with the media and Clinton campaign narratives?  They’re not true.

That’s not to say the results on Tuesday, March 15 weren’t disappointing for Sanders supporters, who were hoping for a repeat of Sanders’ historic upset in Michigan a week before.  But that result was always unlikely; Sanders wasn’t actually predicted to win a single state on Super Tuesday II.  As the graph below shows, Sanders came close to meeting expectations in Ohio and exceeded them in Florida, Illinois, Missouri, and North Carolina.  In other words, while it was a tough night for Sanders in terms of pledged delegates, it was a pretty good night for Sanders relative to projections, not to mention the massive polling deficits he faced mere weeks ago.

Sanders also still has a clear, albeit outside, shot at winning the Democratic nomination.  We’re only halfway through the primary calendar and he is likely to do well in upcoming contests.  Tuesday put him behind the targets he would need in one possible path to the nomination, but there are a number of large, delegate-rich states left, including New York and California, and a good run in the next round of primaries and caucuses would keep Sanders well within striking distance of Clinton.  Again, winning the nomination is definitely a long shot for him – he’d need to pull off more Michigan-like upsets to do it – but if Sanders supporters keep donating, phone banking, and otherwise volunteering their time, it’s also definitely still possible.

Despite these facts, the media and the Clinton campaign will be selling a different, inaccurate story.  It will be up to Sanders supporters to make sure that voters don’t buy it.

Bernie Sanders Is Correct: He Polls Better than Hillary Clinton Against the Republicans

PolitiFact called it “false” because they found a few polls in which Clinton does better.  Their “fact checking” was grossly negligent, however.  While the meaning of “Almost all of” can be debated and I would have rather Sanders said “In general,” the worst anyone who has actually done their homework could rule this statement is “mostly true.”

RealClearPolitics compiles results from every poll and reports averages in many matchups.  The chart below shows how Clinton and Sanders fare on average against each of the top five Republican candidates (shown in order of the candidates’ average ranking in Republican primary polls).  As is obvious from looking at the graph, Sanders polls better on average than Clinton against each of the candidates, and significantly better than Clinton against Donald Trump and Ted Cruz, the two leading candidates in the Republican field (for example, while Sanders beats Cruz by 3.3 percentage points in the average poll, Clinton loses to Cruz by an average of 1.3 percentage points). 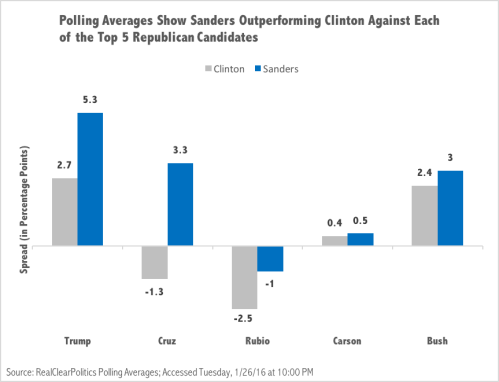 People can have reasonable debates about how to interpret the poll results.  Should Democrats be most worried about Marco Rubio?  Maybe.  Do the results mean much, given that all the matchups are hypothetical at this point and the general election is still a long way away?  Maybe not.  But the evidence we do have is clear: the polls absolutely, as Bernie Sanders said, “suggest that [he is] a much stronger candidate against the Republicans than is Hillary Clinton”

That may not have been PolitiFact’s ruling, but it is the truth.  How’s that for a fact check?

Update (2/26/16): As the chart below shows, newer RealClearPolitics data shows that Sanders is now doing even better relative to Clinton against the leading Republican candidates than he was doing a month ago.

HuffPost Pollster also aggregates polling data.  Democrats will be comforted by their results, which are much more favorable to both Sanders and Clinton than the results from RealClearPolitics.

What is also abundantly clear from both sites’ models is that, as time goes on, Sanders’ standing against the top Republican candidates improves and Clinton’s gets worse.  These polls still certainly aren’t the be-all and end-all of electability evidence, but especially given the trends and Sanders’ superior popularity among millennials and Independents, the argument that these polls tell us nothing is getting harder and harder to justify.  I recommend basing your vote on your values, not on perceived electability, but if electability really is your primary concern, the data very obviously indicates that Sanders is the better pick.

Update (3/19/16): Hillary Clinton is now polling much closer to (though still not) as well as Sanders against Donald Trump, but is getting destroyed relative to Sanders against Ted Cruz and John Kasich. 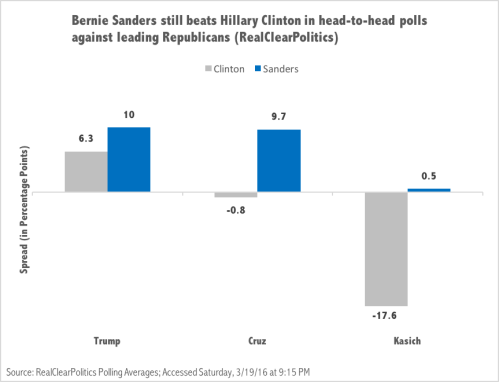 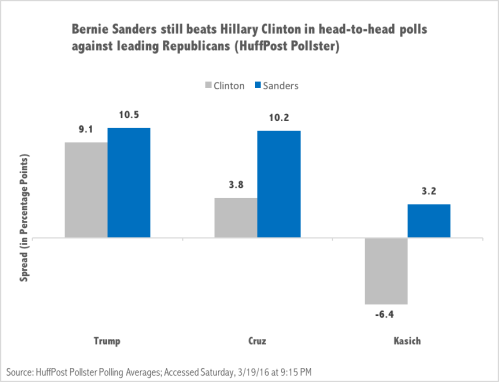 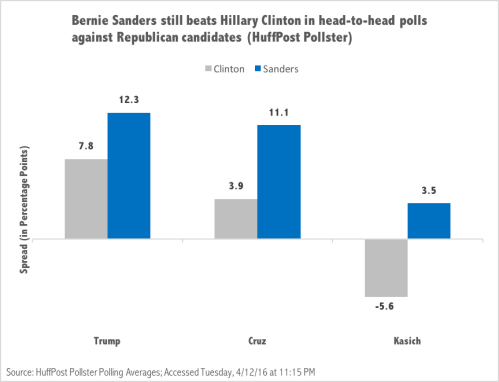 Update (5/17/16): Sanders still has a large head-to-head polling advantage over Clinton when matched up against Trump, who will be the Republican nominee.