At the Democratic debate in South Carolina on February 25, Pete Buttigieg asserted that “the people who actually turned the House blue, 40 Democrats, …are running away from [Bernie Sanders’s] platform as fast as they possibly can.” He wasn’t wrong – the vast majority of Democrats elected in swing districts in the Democratic wave of 2018, like Buttigieg, oppose Medicare for All, free college for all, and other social justice policies that Sanders supports. Along with anti-Sanders pundits and Republican strategists, they contend that the Sanders agenda is an electoral death sentence, that candidates who embrace social justice policy cannot win in contested House races.

Their argument doesn’t hold up to scrutiny, however, and not just because corporate Democrats got thrashed by Republicans all over the country in the decade prior to 2018. The evidence from the 2018 elections in the House also fails to support Buttigieg’s electoral thesis, as progressive Democrats in swing districts performed about as well relative to expectations as corporate Democrats did.

Beginning a year-and-a-half in advance of every congressional election, The Cook Political Report publishes a running list of “competitive races” in the House of Representatives. These races may “likely” be won by a Democrat or a Republican, “lean” towards one party or the other, or look like a “toss up.” They change over the course of an election as new information becomes available. Combining the 58 competitive races that The Cook Political Report originally identified in May of 2017 and the 116 they thought were in play on the day before voters finally went to the polls, a total of 124 districts can be considered to have been “swing” districts at some point leading up to the 2018 election.

Under the assumption that endorsements from Justice Democrats and Our Revolution indicate some degree of alignment with Sanders’s social justice agenda, a progressive candidate ran in the Democratic primary in 37 of these districts. Due in no small part to opposition from the Democratic Establishment, which often bankrolled corporate alternatives, only 9 of these progressive candidates advanced to the general election. Every single one of these remaining 9 candidates ran in a district that was projected to be a Republican win. Only 2 of the districts, Nebraska’s 2nd and New York’s 24th, were even considered in play in The Cook Political Report’s original judgment back in May of 2017; the others were all thought to be solidly Republican.

None of these 9 progressive Democrats won the general election. But using the spread between the Republican and Democrat in the district’s 2016 House election and the spread between Hillary Clinton and Donald Trump in the 2016 presidential election as comparison points, 7 of them outperformed expectations. 2 of them – Ammar Campa-Najjar in California’s 50th district and JD Scholten in Iowa’s 4th district – came extremely close to knocking out incumbent Republicans in overwhelmingly Republican districts (see below). On average, these progressive Democrats outperformed Hillary Clinton by 5 percentage points and the previous Democratic House candidate in their district by 12 percentage points. 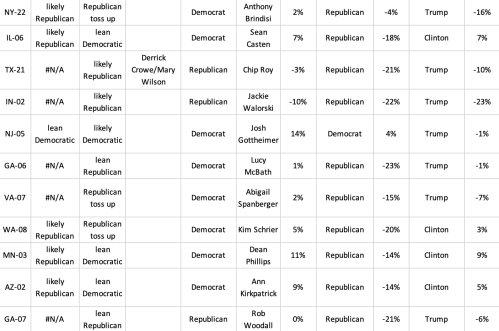 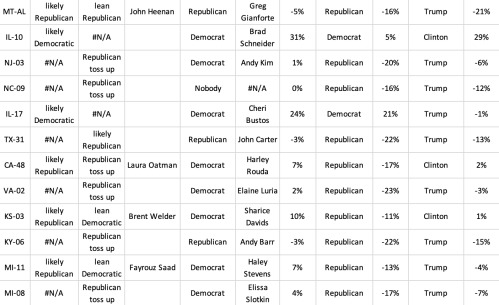 What makes a district competitive and what makes a candidate progressive are up for debate, of course. Should Richard Ojeda, who supported Bernie Sanders in 2016 and outperformed historical expectations more than any other Democrat running in a swing district, be considered one of the progressives? How about Katie Porter, who supported Medicare for All and is a co-chair of Elizabeth Warren’s presidential campaign? Is it appropriate to use a more narrow definition of a swing district that excludes areas in which Medicare for All supporters significantly outperformed expectations? Should major gains from the likes of Campa-Najjar be discounted because the Republican incumbent he was running against (Duncan Hunter) was indicted? Should special elections like the one in Montana in 2017 replace 2016 elections as reference points when they’ve occurred? Given that he literally re-registered as a Republican after he flipped New Jersey’s 2nd district blue, can Jeff Van Drew’s big win really be considered a victory for the Democratic Party? These are all reasonable questions to ask and underscore the inherent subjectivity of electability analyses.

A candidate’s general election viability is ultimately unknowable.  It may depend on her or her opponent’s platform, debating skill, fundraising prowess, personality, or field operation.  It may hinge on the quirks of the community she’s running for office in or how much the media likes her.  It may come down to random chance.  Electability is also often a self-fulfilling prophecy; people commenting on electability and making decisions based on their perceptions of it can actually influence it and do so all the time.

The only thing we can be certain of in the electability space is political strategists’ and pundits’ poor track records.  Many of the people who claim to know what is and isn’t possible in future elections thought Bernie Sanders would barely get 15 percent of the vote in the [2016] Democratic primary.  Many of them were sure that Republicans would never nominate Donald Trump, and once that prediction turned out to be wrong, were still absolutely positive that Trump would never become president.  It’s long past time we viewed their claims with skepticism, especially when there’s evidence that points the other way.

Good policy can sell.  Voters can be persuaded.  Political reality is not something that gets handed to us, but something we help create.  Candidates with economic and social justice platforms can win in purple districts, and they’ll be even more likely to do so if Democratic pundits stop assuming they can’t and start getting behind them.

*Pennsylvania districts had to be excluded from these calculations because the congressional map was redrawn before 2018, making the historical comparison impossible. Texas’s 32nd district, Arizona’s 8th district, and Wisconsin’s 3rd district also had to be excluded from the comparison to the 2016 House election because Democrats did not run a candidate in those districts in 2016 (these three districts were included in the calculated comparison to the 2016 presidential election).