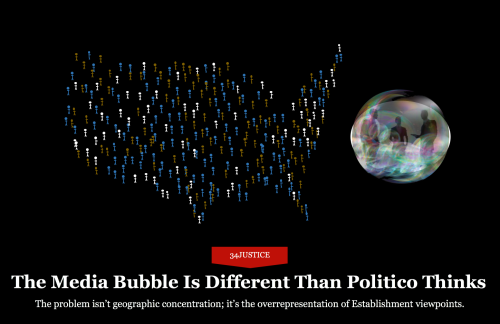 The May/June issue of Politico Magazine contains an article entitled “The Media Bubble Is Worse Than You Think.”  Its central argument is that media concentration in affluent “blue” areas (those that typically vote for Democrats) has led to ideological uniformity in newsrooms, and it cites the increased geographic concentration of writers who work for Internet media sources as evidence that this problem is threatening to get even worse.

Part of the article’s thesis, that “the national media just doesn’t get the nation it purportedly covers,” is undoubtedly true.  But the article is wrong to imply that an underrepresentation of Republicans is the problem.  The actual problem is the mainstream media’s overrepresentation of Establishment viewpoints – from both major political parties – and its marginalization of economic- and social-justice viewpoints.  And the age of Internet media, for all its flaws, is an improvement on what came before.

A quick look at the most ostensibly liberal mainstream media outlets is instructive in this regard.  In the world of newspapers, that’s The New York Times.  While they certainly do commission social-justice-minded op-eds, and while their editorial board often advocates on behalf of less-advantaged Americans, the paper gives more voice overall to privilege-defending viewpoints of those in power than to power-balancing ideas from those who seek to challenge the status quo.  The Times recently hired Bret Stephens, for example, who has previously written anti-Arab screeds and called the idea that racism and campus rape are systemic problems “imaginary” in the Wall Street Journal.  In his first Times column, Stephens revisited some of the climate-change skepticism he’s been peddling for years.

Stephens joined a cast of ten other Times columnists, several of whom appear to believe it’s a major problem that members of what they call the “speech-policing, debate-squelching, illiberal P.C. left” care more about “war victims in South Sudan” than the “scarcity of conservatives” in academia.  The only self-proclaimed liberal among this particular group of columnists seems to think that people are poor, at least in large part, because of their moral failings, and he once argued that “the central challenge in the poorest countries is not that sweatshops exploit too many people, but that they don’t exploit enough.”  And the most ostensibly progressive columnist at the paper spent a great deal of time taking illiberal and/or inaccurate potshots at Bernie Sanders and his supporters during the 2016 Democratic primary.  There isn’t a single Times columnist who “represent[s] the millions [of people] who hate war, support single-payer [health care,] or oppose capitalism,” as Sean McElwee recently noted.

The problem is perhaps even worse when it comes to cable news.  The most ostensibly liberal mainstream station, MSNBC, just hired a senior adviser from 2008’s McCain-Palin presidential campaign and may also bring on a Right-wing talking head who thinks there’s been “a lot to celebrate” from Donald Trump’s first 100 days in office.  One of the station’s longtime anchors voted for and vigorously defended George W. Bush during the mid-2000s, and MSNBC features several leading personalities and commentators who consistently attack the social-justice-minded wing of the Democratic Party, often with misleading reporting.  Even the network’s more social-justice-inclined broadcasters seem wary of straying too far from Democratic Party orthodoxy (note that those who do sometimes lose their jobs), and one of them, the station’s most-watched host, has focused more on conspiracy theories about Russia than on all other issues combined over the last couple of months.

Again, that’s the “liberal” media.  Other major media outlets occupy a space in which fomenting bigotry against a marginalized group of people is okay but tweeting opposition to refugee restrictions is grounds for suspension.  Politicians are encouraged to discuss terrorism and foreign enemies but allowed to ignore poverty, campaign finance reform, and existential threats to the planet.  The most-watched cable network (Fox News) and the editorial pages at the arguably most-circulated newspaper (The Wall Street Journal) are a repository for privilege-defending ideology and alternative facts.

It is for this reason that Politico’s analysis is off base.  The mainstream media’s ideological uniformity is less liberal and more Establishment, likely driven less by geographic clustering and more by corporate capture.  A small handful of companies own the vast majority of the media Americans consume.  If corporate America doesn’t find something acceptable – if it’s threatening to those in power – it often isn’t published or aired.

It is no surprise, then, that a study of media coverage of the 2016 election found that five different Republican candidates “each had more news coverage than Bernie Sanders during the invisible primary” in 2015 – despite the fact that “Sanders had [already] emerged as [Hillary] Clinton’s leading competitor” by that time.  The only vehemently anti-corporate candidate in the race was, according to another analysis that compared Google searches about candidates to the press they received, “being ignored by the mainstream media to a shocking degree.”  When mainstream media sources finally did begin to acknowledge Sanders’ existence, their coverage was often dismissive of his candidacy and/or misleading, and rarely issues-focused.

The liberalization of the news and editorial landscape that the Internet has helped usher in is thus a welcome development.  Some alternative media sources are terrible, of course, and social media, which has some real issues, surely sometimes facilitates the spread of falsehoods.  But what you’ll get from a Breitbart, Drudge Report, or Infowars isn’t all that far afield from what you’re likely to see on Fox, whereas the Internet also exposes people to some of the great alternative sources out there.  Democracy Now!, The Intercept, FAIR, Jacobin, The Young Turks, and The Benjamin Dixon Show, for example, provide a perspective that is very different from those commonly aired on MSNBC or given space in The New York Times.

Exposure to these alternative sources is greatest among young people, who are far more likely to use the Internet as a primary news source than are older individuals.  Interestingly, young people are also least likely to have voted for Donald Trump in the 2016 election and most likely to have backed Sanders in the Democratic primary.  Young Republicans are less likely than their older counterparts to hold extreme and inaccurate views.

This matchup between social-justice-oriented voting patterns by age and media access by age may very well be a coincidence, or it may just reflect the general tendency of younger people to be more progressive than older people.  But it may also reflect that younger people no longer must rely on corporate-owned media for our information.  Instead of being subjected to a steady diet of the Establishment’s point of view, we can identify alternative sources we like, follow them, and engage in fact-checking ourselves.  Rather than being cause for consternation, that’s a development we should celebrate.