My dadabhai (grandfather), Ranan Banerji, was an amazing person with whom I was very close.  He died on Friday, December 9 and I will miss him greatly.

I spent a lot of time with Dadabhai while growing up.  When I was really young, he’d often take me on the train to a nearby town called Lindenwold.  I looked forward to these train rides for days, thinking that Lindenwold was a special place called “Linden World” that specialized in ice cream, which I perceived to be the purpose of our trips.  I learned later that riding the train was actually the main reason for our excursions, and that the ice cream we got at a diner when we got to Lindenwold was decidedly mediocre.  But hanging out with Dadabhai was well worth it. 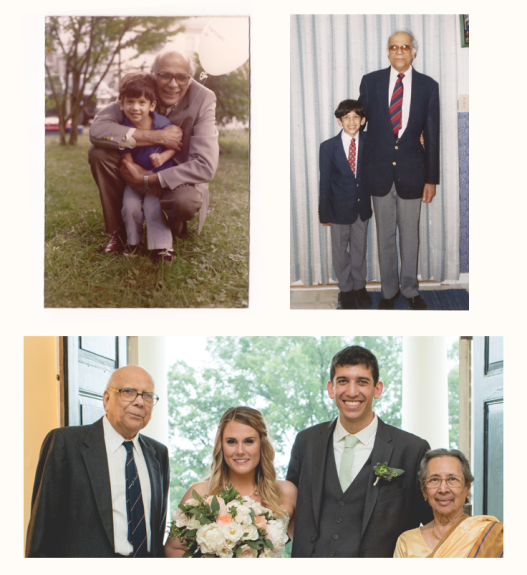 Dadabhai loved to tell stories and jokes and to play games.  A former professor of physics, mathematics, and computer science and an early leader in the field of artificial intelligence, he instilled in me a deep appreciation of the beauty of logic, strategic reasoning, and math. He taught me how to play chess in elementary school and precalculus in high school, tutoring me over the summer between my freshman and sophomore years.  We had many long talks about science and religion, which he felt were more compatible than is commonly thought.  After I went to college, he’d send me emails and handwritten letters about mathematical concepts that he had promised to prove, or about political conversations he’d been replaying in his head.

I looked up to Dadabhai in many ways.  For one, he was a great life partner to my didibhai.  My sisters, wife, and I never tire of hearing the story of how they originally met.  They were on a boat to Edinburgh, Scotland in 1952 and, after their first encounter, Didibhai’s brother raved about Dadabhai’s intellect.  Didibhai told her brother that she thought Dadabhai was a slob.  “And I thought she was a snob,” Dadabhai would say.  “And then, two weeks later, we got engaged.”

I also admired Dadabhai’s power-balancing instincts.  He sought to buy from high-road companies and introduced me to Working Assets, which donates to progressive causes whenever I use my credit card.  He’d recommend I read The Hightower Lowdown and Yes! Magazine, pulling out and sending me articles he thought I’d find particularly interesting.  I recently learned that, in the late 1960s, he openly advised his students to get higher degrees to avoid enlisting in the Vietnam War.  Having such outspoken, authority-challenging views couldn’t have been easy for an Indian immigrant of his generation.

Other traits of Dadabhai’s that will always stick with me were his thoughtfulness and open-mindedness.  During debates, he’d lay out his assumptions and listen carefully to what others said.  He had a clear perspective, but it was grounded in logic and evidence and open to compelling counterarguments; in fact, he’d express excitement when confronted with evidence that was in conflict with a preconceived notion he had.  I think of him whenever I need a reminder to carefully and fairly consider opposing views.

For the last six years, up until Dadabhai’s health no longer permitted it, I would talk to him on the phone on my way to work almost every morning.  It was one of the highlights of my day, as continuing to talk to Didibhai in the mornings will still be.  I hope to one day be as good a grandfather as Dadabhai was to me.