After I argued that labor unions should endorse Bernie Sanders about a month ago, a Hillary Clinton supporter complained on Twitter about this section of my article:

The following meme, describing cumulative donations the candidates have received over the past thirty years, is illustrative: 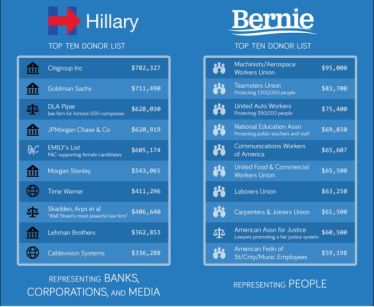 She voiced two criticisms of the displayed meme. First, she noted that it portrays cumulative donations over the candidates’ political careers instead of the donations they’ve received in 2016.  While this point is true, it’s not very meaningful; in fact, one could easily argue that a cumulative look at donations received over several years provides more useful information about donors than a present-day snapshot.  Either way, my piece stated upfront that the meme displayed cumulative donations.

Second, she complained that the meme doesn’t actually display donations made by the companies listed – instead, it displays combined donations from the organizations’ political action committees (PACs) and from individual employees that are on record with the Federal Elections Commission (individual donations constitute the majority of the totals listed). Though this point is a fine one to make, it also doesn’t mean much – donations from individuals are only declared if the contribution is $200 or more and the Center for Responsive Politics, which compiles the data, has consistently reported it this way.  As I’ve noted before and the organization explains:

Our research over more than 20 years shows a correlation between individuals’ contributions and their employers’ political interests and we have also observed that the donors we know about, and especially those who contribute at the maximum levels, are more commonly top executives in their companies, not lower-level employees.

The meme paints an accurate picture of the fact that Clinton raises a lot of campaign cash from big-money, corporate-affiliated donors.  Sanders, on the other hand, doesn’t.  Those who contend otherwise are wrong.

In the interest of fairness and complete information, though, and because we now have data from the most recent filing period from the Center for Responsive Politics, let’s examine the candidates’ fundraising operations for their 2016 presidential bids more closely.

The next figure, like the criticized meme, depicts the larger donations the candidates have received.  Unlike the meme, it focuses solely on contributions to the candidates’ 2016 presidential campaigns.  The fact that corporate donors make Sanders’ list underscores the one legitimate critique of the meme – $200+ donations from individuals at a given company don’t necessarily mean the company has thrown its support behind a candidate.  Yet combined with the first figure, the story here is very similar to that the meme presents: Clinton raises most of her money from Wall Street and other rich donors, while Sanders raises most of his campaign cash from regular people.  Consider, for instance, that Clinton’s campaign has received a total of nearly $2 million in large contributions from individuals associated with the Securities & Investment industry.  That industry barely cracks the top 20 in industry-affiliated donations to Sanders – Wall Street traders appear to prefer Clinton to Sanders by a 40-to-1 margin. 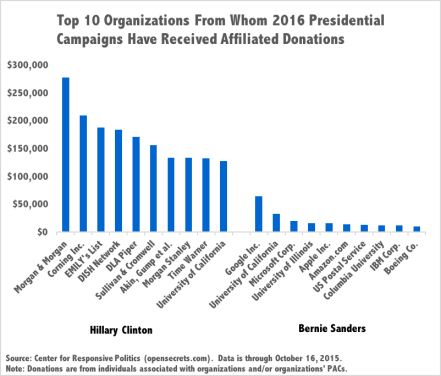 Finally, the figure below (adapted from an earlier post) depicts the amount of money raised on each candidate’s behalf by affiliated Super PACs and Carey Committees, which may be technically separate from the campaign but are in reality closely linked to it.  Clinton has three – Ready PAC (formerly known as Ready for Hillary), Priorities USA Action, and Correct the Record, the last of which has already engaged in dishonest attacks against Sanders.  Sanders has zero.

Sanders does have a much more benign Leadership PAC, Progressive Voters of America, which he founded several years ago to help “elect progressive candidates at the federal, state and local level.”  It has raised slightly more than $16,000.  Two Super PACs have also sprung up to try and support him, but they are unwelcome in Sanders’ campaign, which sent one of them, Billionaires for Bernie, a cease and desist letter.  Clinton, unlike Sanders, has not discouraged unaffiliated Super PACs from supporting her presidential bid.  In other words, while Clinton has tirelessly continued to court the wealthy, Sanders has kept his promise and refused to accept Super PAC support.

I’ve captured the highlights of this more current information in a new meme below.  It clearly has the same punchline as the old one, and may even show a starker contrast between the two candidates’ fundraising operations.

So if you’re not worried about the influence of money in politics or are an affluent donor yourself, Hillary Clinton might be an acceptable Democratic nominee.  But if you want a politician more beholden to the people than to a wealthy few, Bernie Sanders is probably the better choice.